Began with putting on my long pants.  I am wondering now whether I can blog a story which begins with a ritual act and ends at bedtime, and means nothing without all the history which I have already omitted.This, is an evening.  So this is a different sort of blog entry.  One which might be due to the blogger or his intoxication  or is there a difference.

I've already decided that no, I can't do that.  I can't violate people's intimacies to people who don't know them.  All I can talk about is the environment which is awesome.  Raining as I left home, but still with venus and jupiter clear in the sky.  Sat on the porch waiting for my boat to come in.  Watching the sky darken.  Smoked a J on the dock under a full moon and planets.  Walked to the reggae bar, smoked, chilled, and moved on.

To encounter a mixed, inter-generational group where two wizards performed. Joined   Chatted.  one  charms young damsel; one argues with friend.  Then, back here to free myself from having forgotten it rained.

And sitting here naked in front of my laptop, 3G-blogging somewhere that never existed. The computer rings and its my wife.  What kind of world is this?  Belongs in a dylan song.  I open G-Music on my Android looking for Dylan but It's only Rock and roll is on; but undeterred I find (and hear) Highway 61 Revisited.  Call me a fossil.

Making plans for next winter.  I like good weather. Please visit.
Posted by Len at 9:09 PM No comments: 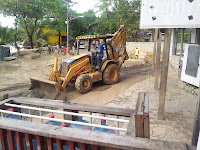 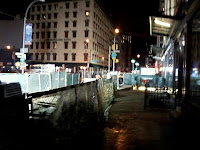 Is not a long time, but it's not nothing either. It's how long I've been a DMT (DiveMaster Trainee) on Roatan, how long since I've left New York's bright hole  for West End's brown one.  It has been an interesting month.  Lot's of time to look at sunsets and stars and to be sad about being alone and not wanting to be.  Also diving and carrying tanks and not killing yourself with your sausage and listening to Memphis Slim.  Traveling, or being. sure is different.  You are never off the net, never (or always) out of touch.  Local R-O-A-T-A-N radio blares where XM once ruled.  Shows local control is not always the answer. 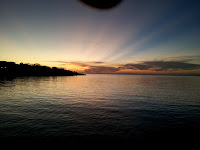 I remember years of walking from the car to my office and saying goodbye to the day - emerging in darkness. Here I watch the sun set, I live with people who want to have fun, I visit a magical world, and I get paid too (OK - not true). Can I maintain my attitude in my usual environs. Tune in for the answer to this question.

The place is magical: beach, sun, openness, freedom. Weather amazing. The town sits around a mud track which keeps the pace safe and sociable. The plan is to pave it, thus enabling profit and commerce. After the skies of NYC, the stars are quite unreal. Perhaps not the stars of the high desert but magical in themselves as three planets divide the sky. Reminiscent of the sky above Tulum in the fall of 74 and that's the problem for it is 2012 not 1974, and I am at the other end of the reef which decorates the coast of from here to there, and perhaps at the other end of a life as well.
Posted by Len at 5:36 AM No comments: